You are here: Home / About / Sara Izadpanah

Ms. Izadpanah is a graduate of the University of California at Davis, where she received a Bachelor of Arts degree in International Relations and a minor in Spanish.

She holds a law degree from the University of San Francisco School of Law, where she focused her studies on international law and public interest law. During law school, Ms. Izadpanah was a member of the Maritime Law Journal and an advocate at the Human Rights Clinic. Through this program, Ms. Izadpanah participated in the Commission on Human Rights Conference at the United Nations with the Human Rights Advocates (HRA) in Geneva, Switzerland in 2003, where she presented a paper on the Juvenile Death Penalty which is still practiced in many nations including Iran. Ms. Izadpanah, through HRA, was involved in closed-table discussion groups with members of countries still in practice of juvenile death penalties in order to assist in the change of their laws.

Ms. Izadpanah took a hiatus from immigration law for one and half years in order to broaden her legal horizons in providing Corporate Law, Contract Law, and Employment Law services specifically catered to doctors and dentists at Dental Medical Counsel, PC. 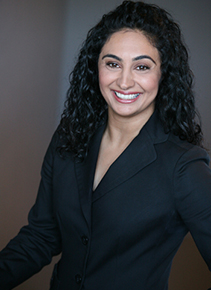